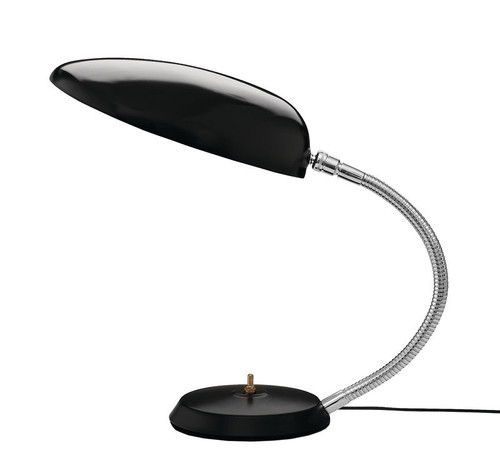 The most iconic products Greta Grossman designed in the 40's and 50's were the Gräshoppa floor lamp and the Cobra floor and table lamps. In 1950, the Cobra lamp won the Good Design Award and was subsequently exhibited at the Good Design Show at the Museum of Modern Art.

Grossman was highly influenced by European Modernism, which had been imported to the US by influencial architects, such as Walter Gropius (founder of the Bauhaus) and Ludwig Mies van der Rohe. Grossman, in turn, played a significant role in defining the aesthetic of mid-century Californian Modernism.

The iconic Gräshoppa lamp was first produced in 1947. The tubular steel tripod stand is tilted backward and the elongated aluminium conical shade is ball-jointed onto the arm; so the light can be directional, yet the glare is minimal. Both stand and shade are powder-coated. The classic Cobra lamp takes its name from the shape of the oval shade, which is reminiscent of a Cobra's neck. The tubular flexible arm can be bent in all directions and the shade can be rotated through 360º. The base is covered in powder-coated aluminium and weighted with a cast iron ballast.

Greta Grossman (1906-1999) maintained a prolific forty-year career on two continents: Europe and North America. Her achievements were many and encompassed industrial design, interior design and architecture. In 1933, having successfully completed her fellowship at the renowned Stockholm arts institution, Konstfack, she opened Studio, a combined store and workshop. During the same year Grossman married jazz musician, Billy Grossman with whom she later emigrated to the United States, settling in Los Angeles.

Through the 40's and 50's Grossman exhibited her designs at museums worldwide, including MoMA in New York and The National Museum in Stockholm.

"The fact that she is relatively unknown just makes the process for Gubi more interesting, as we have an honest opportunity to continue to convey Greta Grossman's designs.Greta Grossman was known in her time in both Sweden and California, USA. However, she ended up largely unknown and almost forgotten. I am very happy that we can give this magnificent female designer a second comeback." - Jacob Gubi

Gubi was founded in 1967 by Jacob and Sebastian's parents, Gubi and Lisbeth Olsen. They initially focused on producing Olsen's furniture designs and selling textiles to the retail sector. Eager to make their own mark, the sons opened a concept store and introduced fashion into the equation. In fact, they were amongst the first to import Prada and Helmut Lang to Denmark, returning their focus back to the family business in 2001.

Since then, they have transposed the original creative vision into a contemporary context, putting Gubi on the map as a global player on the design scene. In an ever-changing international landscape, it takes an enormous amount of drive and determination to keep chasing icons. It's that type of endless energy, enthusiasm and entrepreneurial spirit which has catapulted Gubi into an iconic status all its own.